Judge Walker will leave the bench next year 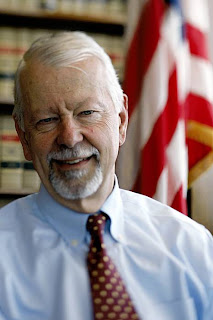 Bittersweet news, gang. Judge Vaughn Walker, the man who ruled that Prop 8 was unconstitutional, is leaving the bench in February.


In a press release from the United States District Court for the Northern District of California, Walker announced he plans step down as chief judge effective December 31 and that he notified President Barack Obama by letter today that he would leave the court in February.

District Judge James Ware will assume the post of chief judge of the Northern District on January 1. Upon leaving the federal bench, Walker plans to return to the private sector.

In his letter to the president, Walker wrote, "Concluding 21 years of judicial service, I leave the bench with the highest respect and regard for the federal judiciary, its judges and their staff and the essential role they fulfill in our constitutional system."

It will be sad to see him go, but at least he will leave on a high note.

source
Posted by Wonder Man at 2:10 AM

If walker is out, then who will make us laugh and forget out stress. Hope he writes some books and be in touch with people!!