NOM had a Tough Week 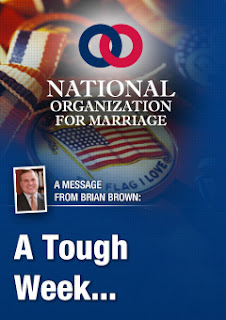 This is some of the letter they sent me:

The news this week is tough. I'm not going to sugar coat it.

In Rhode Island, all five Republican state senators joined the Democrats in the state senate to pass a same-sex marriage bill. It now goes back to the House which had previously passed a gay marriage bill and the governor has promised to sign it.

Some religious liberty protections were added for churches. But as Scott Spear, a NOM Rhode Island Advisory Board member, told the press, "It won't be long before gay 'marriage' activists start pressing hard their new found rights on the faithful in Rhode Island. In Vermont, Christian innkeepers were sued. It was Christian florists in Washington state. Elsewhere photographers, bakers, event venue operators, notary publics, justices of the peace and town clerks have all been targeted for punishment if they do not agree to go along with gay 'marriage' in violation of their deeply-held beliefs."

I think NOM's getting scared.
Posted by Wonder Man at 7:00 AM

I feel so bad for them.

Well, he simply seems to be learnin' what Bob Dylan said a very long time ago: The times, they are a-changin'...