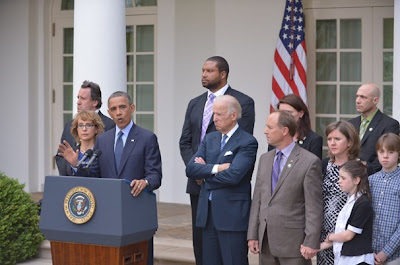 The Senate failed everyone.

President Obama was not pleased at all. He stood with Gabby Giffords and the families who lost someone to gun violence to deliver his remarks.

In his speech, he said:


A majority of senators voted yes to protecting more of our citizens with smarter background checks. But by this continuing distortion of Senate rules, a minority was able to block it from moving forward. I'm going to speak plainly and honestly about what's happened here, because the American people are trying to figure out, how can something have 90 percent support and yet not happen?


Visit NBCNews.com for breaking news, world news, and news about the economy

I wish I could have watched the whole video but I'm happy Mr. President called out those 46 Senators.

Those asshats deserve to have their jobs taken away from them.

I'm fixing my sights on the Sen. Ayotte from NH - the only US Senator from the northeast to kill the bill.

I hope others have a long memory and will do the same. Its time for these people to go.