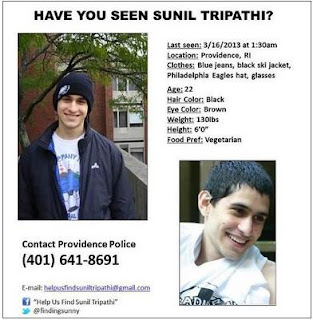 Cops found a body in the Providence River yesterday. They believe the body could be, Sunil Tripathi, the Brown University student who was falsely identified as the Boston bomber.


Providence police Lieutenant Joseph Donnelly said Monday night that “it’s very, very possible” that the body could be Tripathi’s, but also said authorities will not know for sure until the medical examiner’s office in Providence identifies the body Wednesday morning. Donnelly said Tripathi’s family has not been notified of the body’s recovery.

Donnelly said the body was found in the river behind the Wyndham Garden Providence Hotel at around 6 p.m. The coach of Brown’s rowing team, which practices in that area, saw the body floating in the water and called police, Donnelly said.

Tripathi was last seen in his apartment on Angell Street in Providence around 11 a.m. on March 16.