A Dad walks Across America in honor of his Gay Son 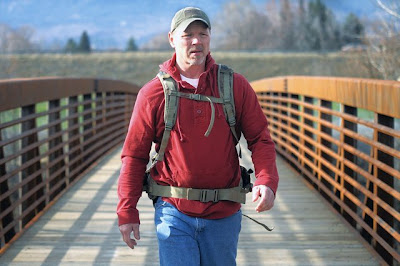 When Joe Bell lost his gay son to suicide, he knew he had to do something about it. So he quit his job and started a 5000 mile walking tour in hopes to stop bullying.

He and his 15-year-old son, Jadin, had gone to a counselor to report the bullying before the high school sophomore from La Grande hanged himself in a schoolyard Jan. 19. The teenager died two weeks later.

The youth had been open about being gay.

The school and family haven't released details of the bullying or confirmed a connection between that and his suicide.

Bell resigned from his longtime job with Boise Cascade to make his walk, which he'll do on two artificial knees. The replacement surgery was done in 2010.

"I needed a break. I was ready, I was looking for something different," he told the La Grande Observer when he announced plans for the trek. "I just wish, however, that I was doing this under different circumstances."

Along the way, he plans to speak at schools and other venues, and emphasize the importance of speaking up against bullying. He has set up a foundation, Faces for Change, to promote anti-bullying programs.

Joe will be walking through the southern states, and will hit the east coast with a special stop in New York City.

It's where he son, Jadin, wanted to live his life.