NOM's Presidential Marriage Pledge is back 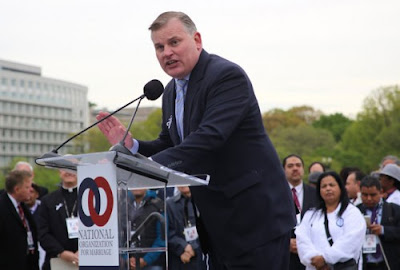 NOM is back to force the GOP to sign their Hate Pledge.

On their site they have this silly pledge against gay marriage. It reads:

Marriage is Under Attack

Marriage is under unprecedented attack by gay and lesbian activists and federal judges who have illegitimately ruled in at least twenty states that it is unconstitutional to recognize marriage in the law as it has existed in reality for millennia, the union of one man and one woman. These judges have ignored the decision of countless elected officials and over 50 million voters who have participated in the democratic process to define marriage. Now the US Supreme Court is considering ruling in a case that could impose gay ‘marriage’ on the entire nation.

It is critical that the next President of the United States be a champion for marriage and commit to take specific actions needed to preserve marriage and restore a vibrant marriage culture in America. The National Organization for Marriage (NOM) has asked each Republican candidate to sign a pledge committing the candidate to particular actions if elected.


And here's the pledge

One, support a federal constitutional amendment that protects marriage as the union of one man and one woman.

Two, oppose and work to overturn any Supreme Court decision that illegitimately finds a constitutional "right" to the redefinition of marriage. This includes nominating to the U.S. Supreme Court and federal bench judges who are committed to restraint and applying the original meaning of the Constitution, and appointing an attorney general similarly committed.

Three, conduct a review of regulatory, administrative and executive actions taken by the current Administration that have the effect of undermining marriage and work to restore our policies to be consistent with the proper understanding of marriage as the union of one man and one woman. Consistent with this, prevent the promotion of a redefined version of marriage in public schools and other government entities.

Four, support the First Amendment Defense Act and other legislation that recognizes the right of organizations and individuals to act in the public square consistent with their belief that marriage is the union of one man and one woman without fear of retaliation from the government.

Five, direct the Department of Justice to investigate, document and publicize cases of Americans who have been harassed or threatened for exercising key civil rights to organize, to speak, to donate or to vote for marriage and to propose new protections, if needed.