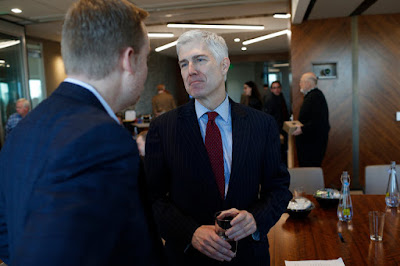 So trump nominates this Neil Gorsuch for the Supreme Court.

Neil isn't a hater of LGBT rights, but he's not a huge fan either. Neil is a typical judge, nothing special about him really.

But here are a few things:


Judge Gorsuch, 49 — who was appointed to the United States Court of Appeals for the Tenth Circuit, in Denver, by President George W. Bush — is an originalist, meaning he tries to interpret the Constitution consistently with the understanding of those who drafted and adopted it. This approach leads him to generally but not uniformly conservative results. “Ours is the job of interpreting the Constitution,” he wrote in a concurrence last year. “And that document isn’t some inkblot on which litigants may project their hopes and dreams.”

While he has not written extensively on several issues of importance to many conservatives, including gun control and gay rights, Judge Gorsuch has taken strong stands in favor of religious freedom, earning him admiration from the right.

In two prominent cases, both of which reached the Supreme Court, he sided with employers who had religious objections to providing some forms of contraception coverage to their female workers.

He voted in favor of Hobby Lobby Stores, a family-owned company that objected to regulations under the Affordable Care Act requiring many employers to provide free contraception coverage. Similarly, he dissented from a decision not to rehear a ruling requiring the Little Sisters of the Poor, an order of nuns, to comply with an aspect of the regulations.